Last year’s minutes were made available to all by e-mail. noticeboard and Internet.  Peter Windscheffel proposed that they were an accurate record of the discussion of that meeting. Majority were in agreement.

However, the day was severely affected by poor weather conditions. He stated that further consideration will be given by

the new committee to further expansion in the future. A trial with early bookable start times also took place on that day

which some members appeared to like and further consideration would be discussed by the Committee. No permanent

changes will be made without full discussion with the membership at an EGM.

matches, which was probably through the camaraderie of the Senior Section and the improving reputation of the quality of

Looe GC and its course for which he thanked both the greens keeping and catering staff.  He also thanked the Secretary,

Treasurer, and other members who had stood in for him as day captains and all competition winners. He then thanked Andy

Beer for standing in during his absences and asked members to support Andy as they had supported him. Finally he thanked

all members for listening to his corny jokes and more importantly for supporting his charity, the Poppy Appeal, to the tune

The Secretary on behalf of the members proposed a Vote of Thanks to Dave for his excellent captaincy. All were in

The figures of the Financial Report as distributed were discussed and are attached to these minutes. There were no questions

from the membership. The Treasurer also wished to thank Roger Jones for completing the annual audit of the Section

The Secretary commented on new initiatives introduced over the year, the popular handbook which the 2019/20 version will again be distributed on payment of the Senior Subscription and also the Functional Manual which has now been used on several occasions to resolve issues. This document has been discussed by many previous committees but had never been completed and adopted until this year. The programme for 2020 will mirror the one passed on from the previous Secretary. The two matches against Merlin have been replaced by two with Newquay and it is possible two with Truro may be added. All competitions both stroke and matchplay and inter club matches, including those affected by poor weather, have been completed this year by rearranging where necessary. The Secretary read out the results of the recent survey as:

To the Question regarding the playing of Roll ups or Individual Competitions?

To the Question regarding 13 competitions off yellow tees and 7 off white tees?

21 are happy with current arrangements 15 said more off yellow tees and 6 more off white tees.

The Committee must remain bound by the wishes of the majority of members and therefore the type and number of competitions will remain the same. The survey will become an annual event.

Secretary stated that he has worked hard in developing a good rapport with all club staff in the hope that this would mutually benefit both the section and the club and it is his intention to continue this.

7.      Appointments of Officers and Committee Members.

The Secretary proposed a Vote of Thanks for Bob Weston and Jeff Rees for their efforts during their time on the Committee.

8.1 Proposer Andy Beer, Seconded Dave Allen.  Proposal is that on Winter Eclectic competition days when, and if course                conditions allow i.e. yellow tees are on grass (not mat) and all normal greens and bunkers are in play the competition will                be a qualifier.  Andy Beer explained his reasoning for this proposal as controlling seniors handicaps better and being in line           with Clubs policy of making all Captains Stableford competitions qualifiers next year.

The Secretary spoke against the proposal as the Committee had already said that competitions will stay the same and also it            would be highly unlikely that course conditions would allow this to happen. Also with the introduction of the WHS things              are going to change next year anyway so let us wait and see what the outcome of this is. Votes for 3 against 6 with several                abstentions.

8.2 The Secretary, on behalf of the members, proposed a Vote of Thanks to the green keeping and catering staff for their excellent work throughout the year. 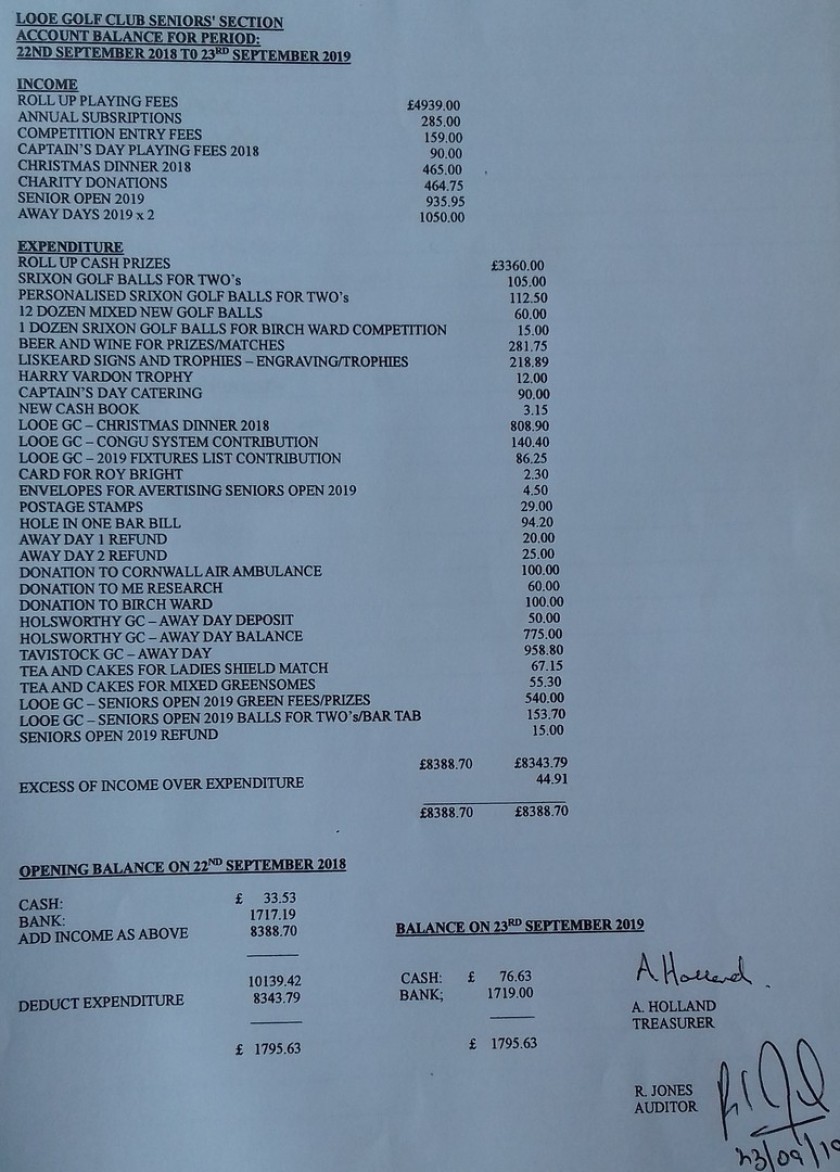